How to Get the Huge Materia in Final Fantasy VII (Passcode Included!) 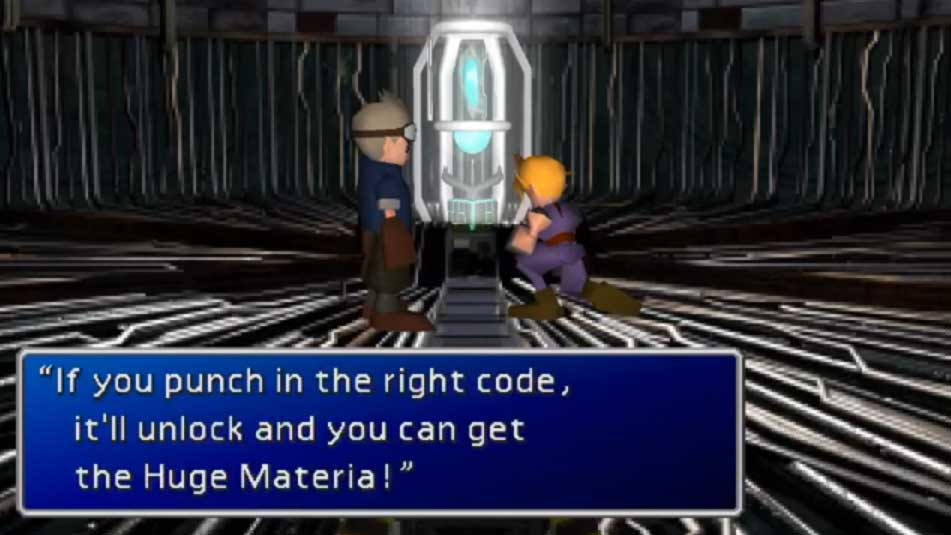 Halfway through Final Fantasy VII, the battle for the Planet hinges upon the Huge Materia. AVALANCHE needs to return to familiar locations and obtain this power before Shinra does.

Huge Materia are a special type of Materia manufactured by Shinra in the depths of their Mako Reactors. They are much larger than conventional Materia and house extreme levels of power. Once Shinra decide that Meteor poses a genuine threat, they devise a plan to use the Huge Materia’s power against it.

Their idea is to place the four Huge Materia together and use their power against that of Meteor. This would happen by placing the Huge Materia in the Space Rocket at Rocket Town and ramming the rocket into Meteor, turning it into a Huge Materia Rocket.

Four such Materia are readily available and they need to be gathered from different parts of Gaia. However, Cloud and his group become aware of their plans and attempt to stop them.

Shinra developed the Huge Materia in Mako Reactors found at Corel, Fort Condor and Junon. Where the fourth Huge Materia was developed isn’t known, because Shinra manage to store it on the rocket before Cloud’s group were made aware of the plan.

Each Huge Materia can be obtained through mini-games in these locations, but even if they aren’t obtained the story still progresses anyway. If the player is successful, they are stored in Bugenhagen’s observatory for later usage.

After Cid takes the lead, head to North Corel the same way you did the first time, by the train tracks—and consider taking Barret with you as well, for optimal effect. You’ll see Shinra troops getting away with the materia by train, so you’ll end up chasing them on your own locomotive, with a 10-minute time limit.

Once you catch up, you’ll have to fight your way through five cars of Shinra troops and do another lever minigame to stop the train. If time runs out, the train will crash into North Corel and Shinra will get away with the first Huge Materia!

For the second Huge Materia, you’ll need to return to Fort Condor. Alternately, you can go here before North Corel. Either way, you’ll be playing one last round of the Fort Condor minigame, but for keeps this time. This is the hardest possible version of the minigame, fitting of the final showdown!

If you lose the minigame, you get a chance to save the day by fighting the enemy commander, CMD.Grand Horn, in a normal boss battle. This beast has no real weaknesses, but watch out for Poison and his Grand Attack, which he’ll use when he’s defeated. He’ll also drop the Imperial Guard item, which is otherwise only found in the Northern Cave and has three linked materia slots.

If you should happen to lose the minigame and the boss fight, it’s not Game Over, but Shinra will take the Huge Materia and Fort Condor will no longer be accessible.

You’ll have to put aside your pursuit of the Huge Materia for a little bit, as some bigger concerns demand your attention. Soon enough, you’ll take Cloud to Junon’s Underwater Reactor, where you’ll run into Reno and the Carry Armor, then chase the materia in the submarine minigame.

This is a simple enough game. You can fire up to four torpedoes at once, so try to lock on to your target multiple times before you launch them. It’s wise to take out some yellow enemy subs if you can, as they’ll make your life miserable otherwise, but the true goal is the red sub.

Once you sink the red submarine, your job is done for now—you’ll have to return later to actually retrieve your prize.

Revisit Rocket Town to intercept the last materia. Cid has a crisis of conscience, and ultimately you’ll end up on the rocket, in space. The player must input a passcode for the Huge Materia in order to obtain the last huge materia.

Whatever the outcome, the rocket still collides with Meteor and is unsuccessful.

Do I Need to Get the Huge Materia?

The story goes on whether you succeed or fail in all of these areas. However there are several big benefits that should inspire you to do your best, or at least reload your save if you fail.

If you save North Corel, you’ll get the first Huge Materia as well as the coveted Ultima materia! Even better, Barret will be redeemed in his hometown’s eyes. If you fail, however, Shinra will take the prize, Barret will have another stain on his reputation, and you’ll need to pay 50, 000 Gil if you want Ultima.

If you save Fort Condor, you’ll get the Phoenix materia from the condor hatchling at the top of the reactor. Otherwise, you would need to dig this up in Bone Village on disc three.

There are no immediate rewards from winning the other two materia. However, if you don’t pass all four missions, the blue Huge Materia will not be present in Bugenhagen’s observatory, and you won’t be able to obtain a powerful summon at this point.

If you’ve passed all these trials, and got both the Bahamut and Neo-Bahamut materia, examine the blue materia in the observatory and you’ll receive the Bahamut-ZERO materia! This is alternately available from Bone Village in disc three, but at a low rate, so it’s much better to get at this point.

You can also return to the observatory to receive the Master Materia, once you’ve met their requirements. If you let Shinra get away with any, you’ll be unable to receive the corresponding Master Materia normally—you’ll need to beat the Emerald Weapon and trade the Earth Harp to the Kalm Traveler, and that’s no small feat!

How to Obtain the Lunar Harp in Final Fantasy VII