Final Fantasy XII: The Zodiac Age, Confessions of a Critic 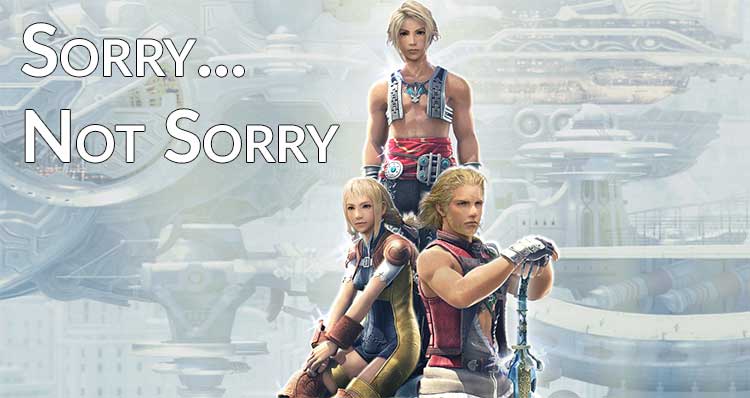 Anyone who has listened to the podcast, since, well, its inception, will know that I have always been quite critical of Final Fantasy XII. Back when the podcast started and even well before that, it was also an opinion that was shared by many dominant sections of the fan base. It’s interesting to see how things have changed.

After playing Final Fantasy VII, VIII, IX, X, X-2, XI and revisiting older titles and spin-offs like Tactics Advance and Crystal Chronicles, Final Fantasy XII was the first Final Fantasy title (aside from Mystic Quest), that just didn’t click when I played it. I was kind of prepared due to the general feeling of uncertainty within the community, but I had still tried to hype myself up for its release. For starters, I was obsessed with Final Fantasy XI, and the “word on the street” that Final Fantasy XII would be like an “offline version of Final Fantasy XI”. Then there was constant listening to Kiss Me Goodbye and Symphonic Poem following their release in Japan. Heck, I’d even bought into the build-up by playing a Japanese import of Itadaki Street Special, which featured cameos from Vaan and Ashe before Final Fantasy XII even released. However, when I played Final Fantasy XII and it didn’t resonate with me or any of my friends both locally and virtually, it was a strange feeling – such disappointment with a Final Fantasy game had never really happened before, not even with Final Fantasy X-2.

Opinions, have of course, softened since then, especially after the release and completion of the Final Fantasy XIII trilogy. There has been a rising desire for Square Enix to revisit the most famous entry into the Ivalice franchise and they have now made a lot of fans rather happy! It started as a murmur, but the nays have since been drowned out by the yays and it’s not too out of place to see fans stating that Final Fantasy XII is actually one of, if not the best Final Fantasy in the franchise. IGN, for example, recently ranked Final Fantasy XII was the second best Final Fantasy game ever made (after Final Fantasy VI), but by comparison, 7 years ago said it was one of the worst.

The announcement of Final Fantasy XII: The Zodiac Age is therefore very well timed. I wouldn’t say that hype surrounding the impending announcement was quite at fever pitch, but there have been numerous things stoking the fires. Arnie Roth’s infamous blunder being one, the PrimaGames “HD Screenshot” fiasco being another. Each served to show just how ready the fan base was to experience Final Fantasy XII again. Today’s explosion on social media confirmed it.

As someone who is quite critical of Final Fantasy XII, I have been eagerly anticipating this announcement for some time. You won’t hear me swinging from the rafters with glee just yet, but now that it’s a reality, and not just rumours behind closed doors, it raises some internal questions. It has, in all honesty, been some time since I was able to play Final Fantasy XII as I don’t have a working PS2 lying around and don’t want to dabble into the realm of PS2 emulation, but with mass opinion changing in such extreme fashion, this will give me the opportunity to see if I would still feel the same if I played it now.

The news that it wouldn’t just be a straight remaster of Final Fantasy XII has also piqued my interest. Instead, as I had hoped, it is the International Zodiac Job System which being remastered instead. This version is said to fix some of the bigger gripes people had at the time with regards to the gameplay and various mechanics. It also adds new content and should help to make the Final Fantasy XII HD Remaster a fresher experience. Although I can’t literally compare as I’m European, I do think it’s akin to how North Americans feel having only just got to experience the Dark Aeons/Penance in Final Fantasy X.

As a video game music enthusiast, the Final Fantasy XII original soundtrack has also been a bit of a bug bear of mine, namely due to the samples used throughout. The orchestral pieces sound glorious, but many other parts of the soundtrack suffer and with this new version getting a remastered soundtrack, I have hope that this gripe will be rendered obsolete. It’s tentative hope though, after the mixed bag that is the Final Fantasy X HD Remastered soundtrack.

So yes, I have been a critic of Final Fantasy XII, but I’m looking at this announcement with optimism. It’s the one HD remaster that genuinely interests me, and not just because I will get to hear Nolan North as Vossler in all his glory. No, it interests me because while I may still feel the same after playing The Zodiac Age when it releases next year, it may also win me over, allowing me to see what many of the fervent Final Fantasy XII fan base have been seeing all along. And that, is something I’m looking forward to.

If they also decide to throw in Final Fantasy XII: Revenant Wings as part of the package somehow, well, then everything gets even more interesting!